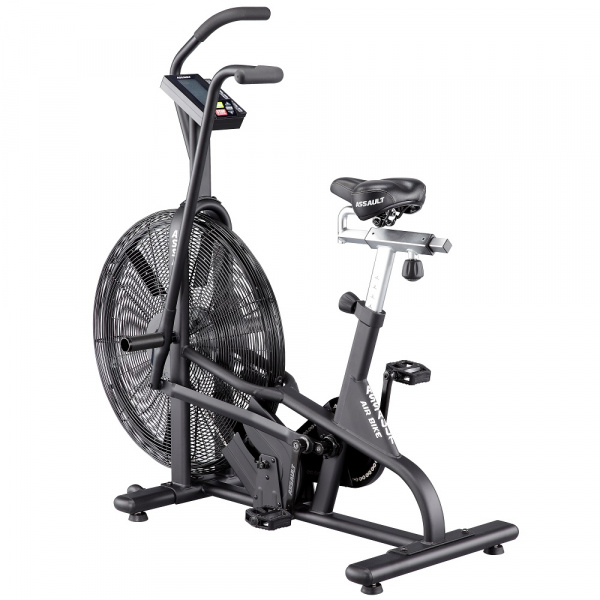 Under the order
Code: AS-1
UAH 53 300
Add to cart Added to your shopping cart

The Assault AirBike is an air-type model, with a vertical sit and 8 levels of load on the muscles of the legs. The seat is adjustable in 4 different positions, a 27-inch fan is installed, a quality steel chain is provided, as well as transport wheels for easy transportation around the gym area. Exercise bike for professional use, will satisfy the demands of any athlete. Assault AirBike is equipped with comfortable handles and seat, universal hand pedal, holders, high-quality silent blocks, pedals and steel molybdenic frame. The air flywheel helps you to build your leg muscles, strengthen your lower back, abdominal muscles faster, in comparison with common exercise bike. Assault AirBike is designed and tested by athletes and fitness trainers. It is a unique exerciser for effective and efficient training that is recognized as the best among the fan exercise bikes for use in functional training clubs. The uniqueness of Assault AirBike in individual settings, considering not only the seat and the hardware, but also the training programs: monitor the heart rate or go to high-intensity interval training. Assault AirBike are the most popular exercise bikes in functional training.

The manufacturer of Assault Fitness Products is the official partner of Reebok functional training Games, the main sport functional training competition, held annually since 2007. The engineers of the Assault AirBike kept in mind that all sportsmen are different, with different approach to training and training programs. That's why AirBike offers customized exerciser settings. Assault Air Bike operates in thousands of functional training clubs around the world, and we are pleased to present this exercise bike in Ukraine.

Assault AirBike is not just an exercise bike. The effect on the air flywheel is much higher due to air resistance than on magnetic exercisers. The proportional principle is a higher speed, a heavier load. An incredibly effective cardiovascular device that will make you stronger and healthier! Universal and easy to use, this exercise bike will become a constant partner of visitors of your gym, diversifying their daily workout.